4 months ago
Our running coach Mathieu Doré recently competed in a couple of huge running events!
You can check out Mat’s results and a rundown of each course from Buffalo Stampede and Warburton Trail Festival lumberjack run’s below.
BUFFALO STAMPEDE SKYMARATHON
SUNDAY APRIL 3rd 2022
Results: https://www.sportsplits.com/races/buffalo-stampede-festival-2022/events/9/
4th Overall – 3:57:29
A classic mountain-marathon in the heart of the Victoria’s High Country from Mount Buffalo to Bright.
Details
Total Distance: 42km
Elevation: Ascent: 1836m + Descent: 2825m
How the race is run:
We start atop Mt BuffaloLeaving the Mount Buffalo Cricket Oval runners will head up past the Mount Buffalo Chalet and complete a ‘figure of 8’. First they’ll run on the left hand side of Lake Catani and follow it around in a clockwise direction. After following the water’s edge they’ll take a right hand turn along the underground river track over rocks and creeks back to the Chalet. From the Chalet, it’s onwards back past the starting line at the Cricket Oval and the descent awaits!

The Big Walk down to Eurobin

The famous ‘Big Walk’ track is a 10km stretch of delicious single track that weaves it’s way down Mount Buffalo to Eurobin. Sure, your quads will be screaming, but you should also be fresh as a daisy during these early stages.

Soak it up, because there’s plenty of climbing to be done from here on in!

From Eurobin over Keatings Ridge to Buckland Valley

After departing the Eurobin Aid Station, your legs will face their first test with a steep grade trail up and over Keatings Ridge, then through farmland and the settlement of Buckland Valley.

Through the Buckland Valley Aid Station and you’ll take a right hand turn up and up and up. The views over the surrounding country side are magnificent here on the way up to Clearspot … if you have the chance to catch your breath and soak them in. This is a sustained climb at around 5 kilometres in length.

Down Clearspot, up ‘Micks Track’, down Mystic, then home

It sounds easy when we say it like that – but it ain’t. The challenging and steep descent from Clearspot has brought many runners unstuck in the past. Finding the fastest way down without losing traction is undoubtedly a challenge as big as the mountain itself.

Then, you’ll come face to face with the infamous ‘Micks Track’ – a 650 metre scramble up 273 metres of elevation at an average gradient of 41.8%.

It’s all downhill from here – the final spur descent of Mystic leads runners to the outskirts of Bright.

Returning along the banks of Morses Creek and finally arriving at the Ovens River the runners will receive a rousing finishing reception back at the event village in the heart of Bright. 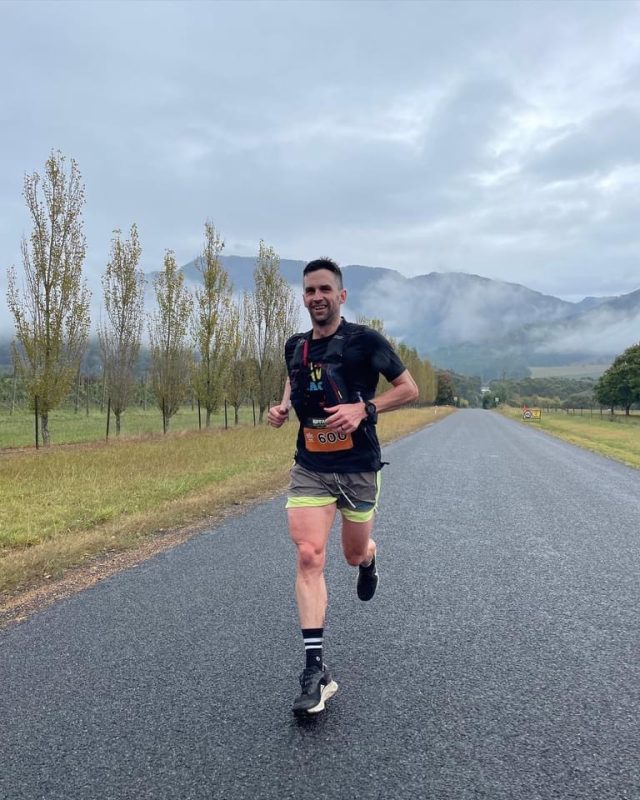 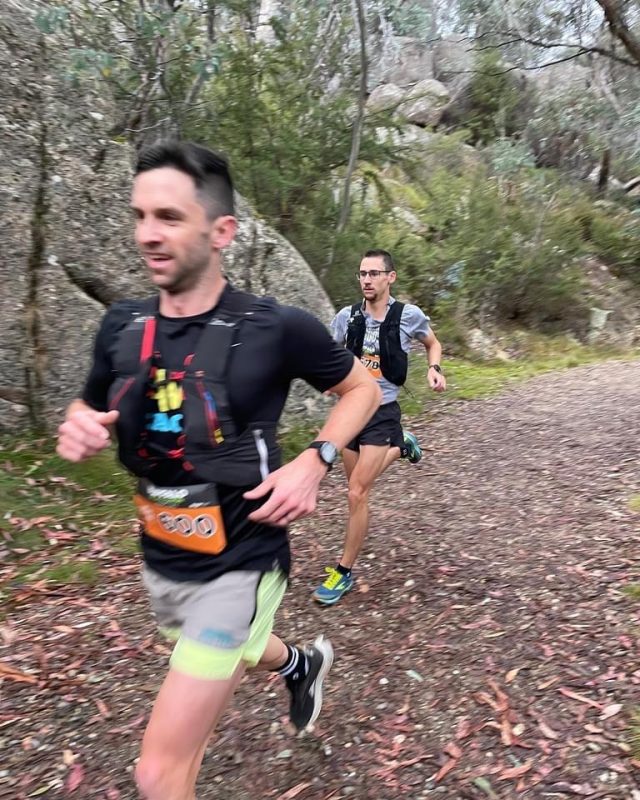 How the race is run:

The tourism bods call the trail the “Walk Into History” due to its heritage as an old lumberjack’s route the linked Warburton and the mountainous logging forests between Big Pats Creek and Powelltown to the south. But bugger walking… we’ll call it the “Run Into History” instead! Actually, we’ll call it the Lumberjack Run in honour of wild tales of wild logger men who used to fell giants – some of the biggest trees in the world at the time – and then literally run out of the bush back into Warburton so they could play football (on the oval that will be our event HQ), get drunk that night, and then plow back up the track into forest after church on Sunday (hard drinkin’, hard playin’, hard prayin’ men these were! They had sins to make up for…), ready for another week of saw milling.

Runners will begin in the small milling village of Powelltown (make your own way to the start line or book one of the event-provided buses when you register, so you can leave your car in Warburton at the finish – there is no public or event transport back to Powelltown). From Powelltown, the run jumps straight on to the Walk/Run Into History trail, paralleling and twice crossing the main road to Noojee (take care). This 11km or so of trail is relatively flat, following old tramlines through thickets of forest once out of the village. Turning north, the trail gets spectacularly pretty in amongst giant ferns before getting spectacularly steep: a near 500m vertical ascent in only 3km with grades of around 30%. Reckon you can run it? Nah!

At around 25km, runners reach a T-junction, taking the sharp right to complete an out-and-back to the famous Ada Tree. This is one of the largest living trees in the state (as opposed to the tallest). A giant Mountain Ash (Eucalyptus regnans), it is estimated to be over 300 years old and towers over the surrounding rainforest in the headwaters of the Little Ada River. There is a spectacular loop walk to Ada worth returning to investigate, however we don’t have permission to use the access trail – still, the out and back is equally stunning and also passes old milling relics from the days when lumberjacks ran these trails.

From the Ada Tree, it’s a return run to the junction on onward back west, heading to Starlings Gap, and a major aid station at roughly 30km, before a long gentle bomb down for a quad-testing ten kilometres before you pop out at the small, beautiful settlement of Big Pats Creek.

Now steel yourself – there’s a little bit of unavoidable (quiet country) road to pace yourself on as you head towards Warburton along Big Pats Creek Road, taking a left at Riverside Drive. Not too far along (a few kays) we’re punting you through a river crossing (hello soothing waters of the Yarra!), and back on to trail (ahhh), which you’ll stay on until the end. From here it’s a meandering, flat, riverside run, coming in to the rear of the Warburton Caravan Park. Run through it – be respectful of its residents (which may be you for the weekend if you’re camping!). Soon enough you’re punted under a bridge, onto more riverside trail leading you eventually to the Warburton Football Oval and the finish line. If you’re as tough as the loggers of yore, lace up some boots and have a kick of the footy. If not, just have a beer… you running lumberjack you. 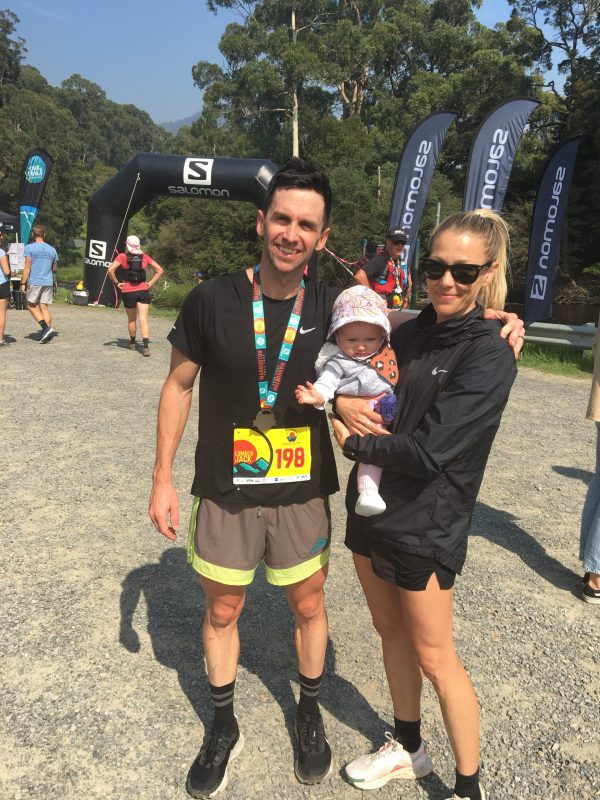 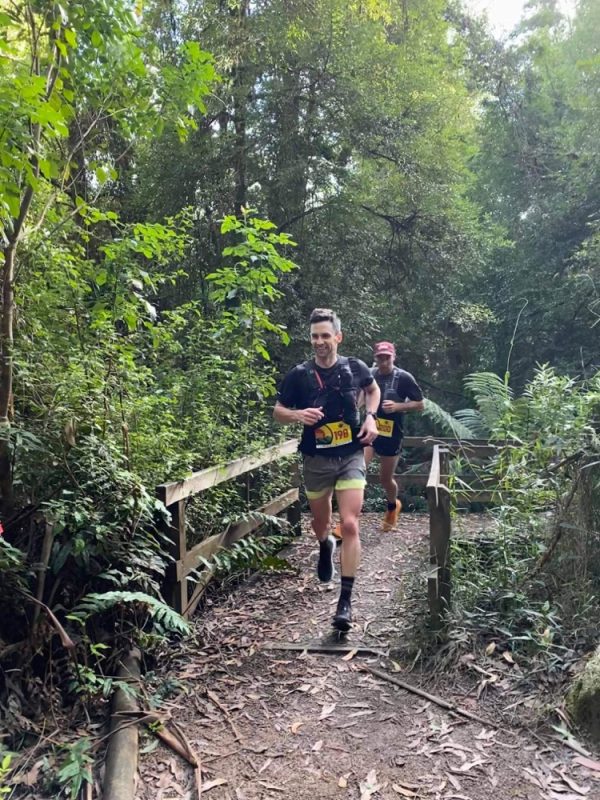