It was with mixed emotions I packed up my valuables (roadie/brand new Merida Time Warp TT bike – oh and my family) and took the 3.5 hour trip up to the nations capital.

I had missed the previous NRS tour due to illness and was feeling a little anxious/underprepared.

Knowing I had my teammates from the Bicycle Superstore/Torq Women’s Road Team waiting up there for me helped calm the nerves a little; so too the innocent questions from my daughters while enroute “Mum why don’t you ever win anything?” “Mum how come you never get to stand up on the podium?”.

The Tour was based out of the Stromlo Cycling Centre- an amazing purpose built cycling facility catering for both on and off road cycling.

With my brand new stealth black Merida Time Warp and glorious ENVE wheelset bike on it’s maiden ride I was happy to kick the tour off with the 16km undulating Individual Time Trial where I placed mid field (a huge improvement from previous races!). 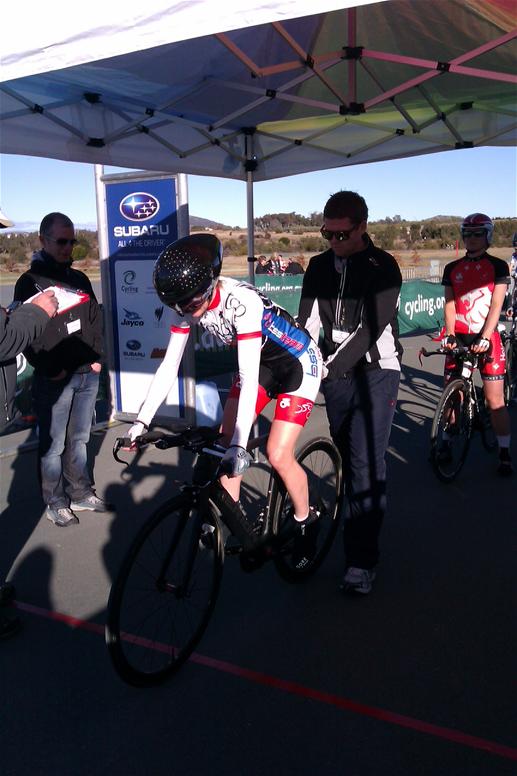 The second stage was a 2 lap/79km RR. Being back on my roadie felt like sitting in an armchair after the previous days TT positioning.

I felt comfortable and strong on the first hill, tapping away with the bunch. I was planning to be conservative this tour and see how I went as I was a little uncertain of my form.

I enjoyed the false flat – one of my teammates Chloe had made a break and was about 200m up the road with one other.

I jumped in to second wheel and (as is my personality) felt very guilty about not taking my turn up front when the rider in front’s elbow flicked indicating me to roll over.

At the conclusion of a long false flat the road dipped down – a reasonably technical descent.

Unfortunately I was spooked when my back wheel skipped over a rock and lost contact with the main bunch and was moving backwards FAST!

Fortunately my teammate Chloe came past near the bottom and indicated I jump on her wheel – she dragged me expertly and safely to the bottom and we commenced the climb.

We reached the bottom a few hundred metres into the next ascent however this coincided with the lead bunch kicking for the second QOM.

I was unable to bridge that gap to the front group and remained with a group of seven and the second bunch on the road until the finish.

Our group worked well together with some hard work and good leadership in the group – just managing to hold off the main bunch. 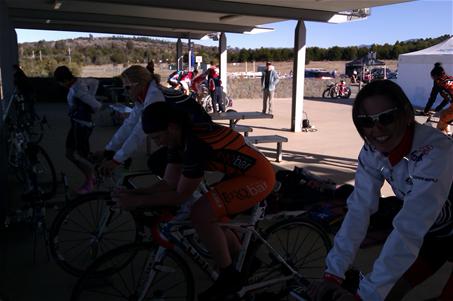 Flick Wardlaw, Nadine Le Mascam and Lisa Barry warming up for Team Bicycle Superstore/Torq in Stage 2 of the Tour of Canberra. Vic Luxton-Bain makes a cameo in the background!!

The third stage was a 40 km RR. I was looking forward to this as it was in the reverse direction of the previous days stage. This meant that yesterdays technical descent became a great 3km climb to the first KOM.

I felt confident that I could handle the descent in this direction in spite of the anticipated high speeds considering the shorter distance.

Unfortunately, 20 km in I hit the only pothole that could be found over the whole weekend (and probably the only one in all of Canberra!) which knocked my back wheel causing it to rub.

Perhaps a combination of some heavy legs and this mechanical meant I lost contact with the group over the next 10km.

While the BSS/Torq team were brilliant at encouraging me to continue riding with brakes rubbing I felt extremely anxious when the road dipped down.

After having a quick stop, a spin of the wheel and a quick adjustment of the quick release (nothing wrong with the wheel at all, the ENVE’s are bullet proof-the rear just got knocked sideways by the hole in the road like Cadel at last year’s Tour!). I jumped back on the bike confident of my (and my competitors) safety.

In all of my years of competing I can honestly say I cannot recall having any bad luck. I am proud to write that after sorting out my wheel I grovelled and was finally able to leap frog between a couple of small groups to the finish.

Nadine, Lisa and Flick getting ready for the final stage of the Tour of Canberra.

The tour concluded with a 40 min crit on the Stromlo circuit. I am very happy to say I was able to finish with the bunch in what was a very fast race.

My Garmin tells me we averaged 41 km!

Anyway, I was pleasantly surprised to log onto the results today and find out I finished 23rd overall in what was not my best tour to date.

It was a major learning experience for me and I now understand there is far more to racing than climbing hills!

I have so much to learn and I have come away from Canberra excited and motivated by the prospect.

A big thank you to our sponsors- Bicycle Superstore and Torq Nutrition, for getting us through the race.Without their support and products it would be impossible for us to perform at our best. The guys at the Bicycle Superstore in Albury went above and beyond to have my TT bike up and running-and it was flawless (perhaps one day I will be!!)